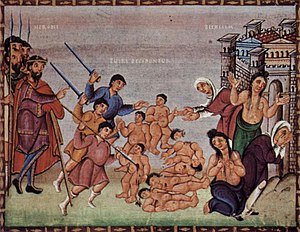 In the biblical narrative the Massacre of the Innocents, males under the age of two were selected to be executed by the state

An androcide is the act of killing males, both men and boys en masse out of misandry. In the manosphere, the scope of androcidal behaviour is sometimes broadened to include any act that renders men worthless or disposable, thus at least puts them metaphorically and theoretically in an androcidal (or pre-androcidal) state.

Some incels are worried that a future government would cull all incels, particularly a right-wing one.