From IncelWiki.com, the largest incel encyclopedia
(Redirected from IOI) 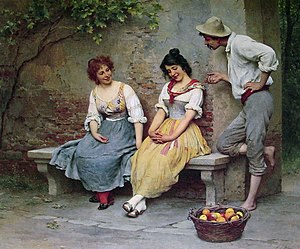 An indicator of interest, often abbreviated as IOI, is a definite signal that a person is interested in you romantically. There are many variations of IOIs, and not all people who are romantically interested are able to give them out properly due to shyness or other difficulties. In addition, many dating-challenged people claim to not get IOIs often enough, if at all. The opposite of an IOI is a fuck-off signal.

A number of love-shy.com commentators believe that most love-shys and incels suffer from a defiency of IOIs, and so when an opportunity finally arises, they are unable to act correctly and thus botch the opportunity due to a lack of prior practice. This is an example of a vicious circle that keeps people incel and love-shy.

Love-shys tend to have as much difficulty responding to IOIs as they do giving them out. For love-shys who are able to receive IOIs at a decent rate, this can be psychologically devastating, as they are unable to capitalize on opportunities that are thrust in front of them.

The need for a girl to indicate her interest before you ask her out is controversial. Some claim that all that is needed is to establish a good rapport with a girl beforehand, while others claim that this method consistently results in failure more often than not. Some believe that a definite indicator of interest is needed beforehand, and if the girl is ambiguous it means that she is not interested.

The generation of IOIs ties in with the looks/personality controversy, where some claim that a minimum looks threshold is required to receive enough IOIs to act on them. Others claim that a certain personali-tee-hee type is needed.

This page borrows some general ideas or text from the Love-shy.com Wiki. Borrowed material has been altered and is rarely reproduced in full. Relevant text is licensed under Creative Commons Attribution-NonCommercial-ShareAlike 3.0 Unported (CC BY-NC-SA 3.0). The original text of the Love-shy.com Wiki page you can find here.
Retrieved from "https://incelwiki.com/s/index.php?title=Indicator_of_interest&oldid=74217"
Categories:
Hidden category: