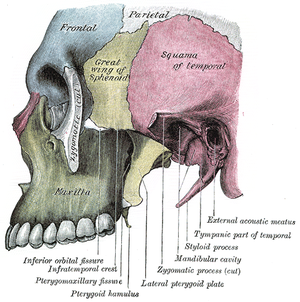 The maxilla is the upper jawbone. It fuses together two irregularly-shaped bones along the median palatine suture, located at the midline of the roof of the mouth.

Maxillary retrusion, also called maxillary retrognathia or maxillary hypoplasia, is when the maxilla recedes with respect to the frontal plane of the forehead. A retruded maxilla can have detrimental effects on a person's aesthetics.

Maxillary retrusion can be prevented or reversed, during childhood, using an exercise conceived by the orthodontist Mike Mew. This exercise involves putting pressure on the roof of your mouth using your tongue, and should be done continuously throughout the day. This exercise not only protrudes the maxilla, but protrudes the zygomatic bones as well, because the zygomatic bones are connected to the maxilla.

Note that it is possible for one to have a bimax yet a retruded maxilla.

A narrow maxilla is a maxilla which does not have much lateral projection. It could be caused by poor oral posture. In narrow maxillas, the cheekbones do not project laterally much. Narrow dental arch.

Palate expansion is used to correct a narrow maxilla. It could broaden cheekbones as well.

Maxillary impaction is a procedure which corrects a downward maxilla. A LeFort III could elevate the maxillozygomatic area, including the infraorbital rims, upward.

Dorsal hump ("hook nose") as the bottom cartilaginous part of the nose gets pulled inward by the retruded maxilla.[2]

A retruded maxilla is maladaptive since it causes snoring, sleep apnea, insufficient oxygen intake and spinal imbalance.. So a retruded maxilla like all other facial deformities are selected against. A retruded maxilla pushes the tongue back thus obstructs the airway, causing snoring and sleep apnea. People with sleep apnea have 20% decreased life expectancy[3] and increased risk for cardiovascular disease.[4] Most stroke patients suffer from sleep apnea.

A retruded maxilla blocks the airway passage, which in turn makes people to move their heads forward to compensate. Forward head posture, however, places a load on the spine. It could increase spinal load by several pounds, inhibiting mobility and increasing needless effort to maintain balance.

A protruded maxilla increases the volume of the resonance chamber, the mouth. This leads to richer vocalization. Singers have protruded maxilla and are more likely to be attractive. Example. Good looking actors like Johnny Depp[1] and Brad Pitt[2] have good voices.

The indicator line can tell you what your maxillary position is.